If anyone is still checking in on this blog I apologize for the lack of posting. It's been a busy couple of months but I'm finally getting caught up. I can't post any of the professional stuff I've been working on but I should have some fun new projects to announce very soon. Most recently I've just wrapped some more work for New Holland Brewing and I can't wait until the product is on the shelves and I can show you what I've been up to.

This coming week my wife and I are heading to New York so she can do some modeling and I can visit various children's book publishers and the New York Comicon. I'll be dropping off samples the old fashion way and touring the city at the same time. Cross your fingers, I'm hoping to find my first publisher.

In just a couple of weeks I'll have some of my paintings in two galleries here in Chicago. Both of the galleries are having a Halloween theme and have asked me to participate.

I'm very excited about these shows. They're my first gallery shows ever and both of the galleries sought me out. The only downside to this great thing is that both shows are on the same night and the galleries about an hour apart. I will try to split my time evenly between them but I have a feeling by the end of the night my brain will be fried like an egg.

The first show of the evening will be at Kosar Effects Studio and Gallery starting at 6:30 in Westmont, IL (a Chicago suburb). I'll be there at the opening and hang around for an hour or two. I'll have two smaller paintings in this show.

Next up, I will have seven paintings hanging up at Gallery Provocateur on October 29th. The show starts at 8PM but I think I won't be there until about 9 or 9:30.

More info to come soon and I'll have plenty of art post in the weeks to come. For the time being, I give you a little sketch that turned into a painting of Eeyore from Winnie the Pooh. I've been experimenting with this older style of illustration and drawing characters from Winnie the Pooh is a fun way to test the waters. 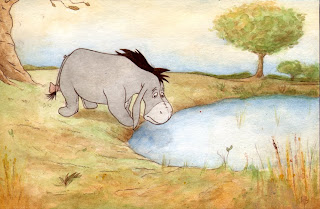 Podcasts I listen to