Looking back now, Spectrum Fantastic Art Live seems like dream. It’s almost unbelievable that I had the opportunity to meet so many of my favorite artists without the normal trappings of most conventions. Thankfully I remembered to take pictures for back up when my memories start to fade.

Kansas City surprised us with how friendly everyone was. From the minute we checked in to our hotel until we left 4 days later every local was friendly and helpful. The local BBQ lived up to its reputation as well. If you go, I highly recommend getting burnt ends from Jack Stack and/or Arthur Bryant’s.

The night before Spectrum Live started my wife and I got a chance to see the premier of a heart-wrenching documentary called, Better Things: The Life and Choices of Jeffrey Jones. As a long time fan of Jones I was more than impressed by this film. There were lots of great interviews from Jones’ friends, family and peers that gave a deeper insight into Jeffrey’s work and his disappearance from the art world. The film will certainly pull at your heart strings so be prepared.

After the premier we met up with our friends Swain Hunt and Dwight Clark from the Sidebar Nation Podcast. We proceeded to hangout in the parking lot of the theater listening to Greg Manchess tell a few comedic stories about another big name illustrator attending the con. While we were chatting with Greg I looked around and noticed the Fenners, Mike Mignola, Iain McCaig, Irene Gallo and a few others just hanging out with us. It was pretty surreal to be just milling about with a bunch of people you’ve only read about in books or online. Every single person there was laid back and friendly. It felt like a party already. Later that night we went out for drinks and snacks with Swain, Dwight and their friend Dustin. Great conversations were had over tasty food and a terrible one man cover band.

The show itself was more than I thought it would be in most aspects. As a lifelong comic convention attendee and current exhibitor, I have never seen a convention so well put together. The space was large, well lit and inviting. One whole side of the convention hall was a floor to ceiling window that let in more sunlight than most of us artists see on a regular day. The floors were carpeted and higher parts of the walls were covered in a sound dampening material that absorbed all of the background noise of a normal convention and made conversations easy to manage. For anyone who hasn’t been to a large convention, the acoustics of most convention spaces lead you to shouting to overcome other conversations, terrible P.A. systems and the shuffle of hundreds of people up and down concrete floors.

Once we settled into our booth and met our neighbors I was able to take a quick gander at the work on the show floor before the con started. The talent that filled the booths was impressive. Within minutes I was making plans to work harder and get better at every aspect of my craft. The intimidation I felt wasn’t negative but more of realization that my competition is young, fast and decisive. Now I know the road I need to travel to get where I want to be and there is a great sense of relief knowing what my goals are and knowing that they are achievable. From what I’ve heard from other attendees, this feeling did not belong just to me.

On the business side of things, I did pretty well. I brought a pretty large range of things to sell ranging from $10 up to $200. I mostly sold books, etchings and original art. I made a bunch of contacts and I think a few new fans. My goals for this convention were to make back the cost of my table and travel expenses, meet as many of my peers as possible and get my books into the hands of art directors and artist who have inspired me over the years. I was successful on all fronts.

Meeting artists whose work you grew up loving is a somewhat intimidating affair. I have met a multitude of Hollywood celebrities in my life and none of them gave me that geeky “hero worship” feeling that I got at Spectrum Live. Thankfully I was able to hide it and act like a normal person (I hope).

There were rarely lines to meet anyone, including the bigger name guys there and if there was, you knew you could walk around for twenty minutes, come back and the line would be gone. Most of the artists were happy to put down whatever they were doing and chat with you about art and, more often than not, how awesome SFAL was.

On Saturday night we went to the Spectrum Live Awards Ceremony at a beautiful theater in downtown KC. The performance by Android Jones and Phaedera were mind blowing. The combination of dance and the stunning imagery of Android Jones being projected in front of the dancer was nearly psychedelic. The awards were fun and lighthearted. It was a mix of the Oscars format with a bunch of goofy artists who were all a bit shy when they won an award.

Sunday came and went in a blur. Everyone was up and moving, buying books, prints, art or just making sure they talked to one artist or another. Despite most of us being tired, I think everyone was full of energy and excitement from the weekend. Almost everyone I talked to felt inspired to get back to work. At the same time, I think many of us didn’t want to the weekend to end. We were all having too much fun.

My only regret from this show was that I didn’t have time to see any of the panels or demos. If I wasn’t at my table selling stuff or working I was up and moving, trying to meet as many of my peers as possible. If Spectrum Live has a year two I will do my best to carve out a little time to attend some of the panels and demos.

I hope I get to do this again next year!    Special thanks to the people who made my weekend awesome, my lovely wife, Natanya, my new friends, Dwight Clark, Jean-Baptiste Monge and Marjo, my old friends Swain Hunt, J. Anthony Kosar and Ryan Flaherty. It was an honor to get to spend the first Spectrum Fantastic Art Live with all of you.

A few photos from the show:


J Anthony Kosar, Natanya and I having post show drinks and conversation on the steps outside of the hall.


2/3 of Sidebar Nation, Swain Hunt and Dwight Clark along with Dustin, Natanya and I at Bar Louis. The only thing open late and still serving food Thursday night in downtown KC. 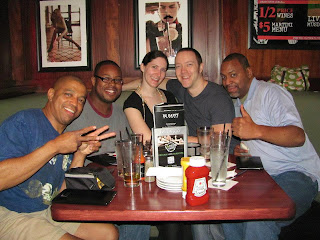 *More photos from the show in the previous post
Posted by Kyle at 8:47:00 AM

Thank you for sharing your account of Spectrum! I am finding any that 'spectrum fantastic' posts about *grin*
I am still feeling euphoric from the show! Pretty much everything you said concerning the feelings experienced hits the nail on the head on this end too.
Not sure if we met, but glad to have shared the same event. :)

Thanks Lydia! Were you set up at the show? If so, sorry I missed you! Despite having 3 days to see everything and talk to everyone, I had a hard time leaving my booth for more than 10min to walk around and see the show.
Glad you had a good experience and hopefully we'll get to do it again next year!

Thanks for sharing the pics/memories. It was great to briefly chat with you and Natanya at SFAL; your work was a real treat to see in person. :)

Thanks Laura! It was nice chatting with you too!

Podcasts I listen to